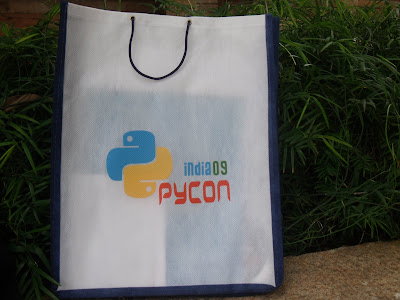 It was 26th September. The Day 1 of Python Conference India, 2009. It was held at IISc. I was all excited to attend the same. At 8 30 I was at IISc. Registrations were started. Since, I had registered late, I paid 300. It was worth it. Got 2 T shirts( One is mandat given, and the other T shirt had a constraint, which I ll be telling you later :) ) Food coupons were also given for 2 days, including Tea :)

Madhusudan came after few minutes. He had come with his team mates from IIT Bombay. ( Prabhu Ramachandran, Asokan Pichai, Puneeth and Kadambari Devarajan). After sometime, Krishna, Subbu and Roshan were also there. We all went to Hall L4.

My adventures with Python - Prabhu Ramachandran :

At 9.30 in Hall L4, Dr. Prabhu started exploring his adventures with Python. How he used python for various Research work at IIT Madras and Bombay. We were really shocked and amazed by his views. A person who is into Aeronautics, totally non CS background, has mastered Python to a great extent, and still hungry to achieve even more. This was very catchy. His implementation of Python for Temperature studies,  and implementation of numpy and matplotlib for statistical calculations, and his implementations of VTK combined with Python were excellent. The way he took us about his journey in python was really awesome. We felt happy that Vattam and Madhu had got into an excellent project at IIT Bombay, and adding to that an energetic Professor too. The session ended at 10.30.

Build Out for Development and Deployment by Baiju Muthukadan :

At 10.45 we went to Hall L5. Baiju gave a session regarding the usage of Build Out and its tools. How it can easily be installed and implemented. This session was not that effective. It ended at 11.30

At 11.30 We went back to Hall L4. This session was given by Senthil. He is from Akamai Technologies. He showed the implementation of Sieve of Eratosthenes. He also gave brief overview of various sorting techniques. He also showed bisection sort , tim sort of python, sorted function and timer function. This session was very informative.

This session was followed by Lunch and the next two sessions were not effective again. At 3.30 pm we ( Me, Subbu, Krishna, Roshan, Nagraj and Kavoor) went for sight seeing at IISc.

National Mission on Education through ICT and Python by Asokan Pichai and Prabhu Ramachandran @ 4.30 :

This was the most awaited session , atleast for us ( We were very keen on getting T shirts :) :) of FOSSEE - Free and Open Source Software for Science and Engineering Education ). Asokan the implementor and Prabhu the Dreamer, gave us the overview of thier plans and thoughts in the coming years. They are very keen on bringing python into the Syllabus of Engineering students. This is purely on general basis. They were not targetting CS branches. After the session, all the people in the hall were distributed the Live Python 9.09 DVD and T shirt. Whole day was a wonderful experience and it was very informative.

After the sessions, we were at IISc till 7.30. Krishna and Subbu left as they were getting late. Later, Madhu, Vattam, Roshan, Nagraj, me went and hogged at a hotel. Then, we all left for home.

It was all worth it. Especially after getting those 2 geeky T shirts and a DVD :)
Special credits goes to Madhu, Vattam , and the entire team from IIT Bombay. Hope Python gets into our VTU Syllabus :)
Posted by Chandu at 6:30 AM